Welcome to the Community Garden in Roseland.

In 2021, the Roseland Community Organization, Port Nelson United Church and the City of Burlington jointly cooperated with grant funding, community donations and labour to create this beautiful Community Garden.

Please feel free to linger and enjoy this ‘thin spot” in whatever way moves you.

If you wish to learn more about the significance of aspects of this garden, read on with these links: 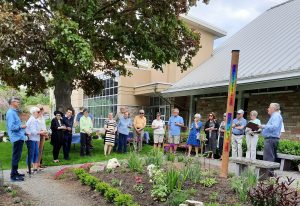 Community members meet in May 2022 to unveil the bench dedications and the Peace Pole. In 2021 the City opened applications for Neighbourhood Community Matching Grants. The Neighbourhood Community Matching Fund was created to inspire Burlington residents to actively champion projects in their community to improve, build and strengthen Burlington and enhance the quality of life for everyone. Bringing neighbourhoods and communities together to make new connections and create a sense of belonging is just as important to the City as the project itself.

There was a very small window to make the application which we did after getting Roseland Community Organization and Port Nelson United Church leadership on side. Our application was accepted in the summer and we moved forward on building the garden, just in time for the fall frost.

Our aims in building the garden were to:

Our Peace Pole joins more than 200,000 poles in close to 200 countries to declare “May Peace Prevail on Earth”.  The idea of Peace Poles was thought of by Masahisa Goi in 1955 in Japan.

In the Community Garden, we have selected nine languages with two strips in English and a plaque in Braille.  The language strips all say “May Peace Prevail on Earth” in their respective languages. The four sides are as follows:

South side – The English phrase “May Peace Prevail in our Homes and Communities” is paired with Ojibway which is one of our area’s Indigenous languages.  As you face this side of the post you will be looking out over our community and the community garden.  Between the two language strips is a Braille plaque with the same message, “May Peace Prevail on Earth”.

West side – Dutch/Hebrew – Dutch recognizes the twinning of Apeldoorn, in the Netherlands and our City of Burlington in 2005.  Hebrew is a historical foundational language from the Middle East.

East side – Japanese/Arabic – Japanese is in honour of our City of Burlington’s twinning with Itabashi, Japan, in 1989.  Arabic is a historical foundational language from the Middle East.

The significance of Japanese and Dutch languages in Burlington

In 1984, a Mundialization Committee of volunteer citizens was formed in Burlington to pursue twinning with another country.  A by-law was passed in 1985 to declare Burlington a “World Community” dedicated to international co-operation (mundialization) and that the City of Burlington, as part of its Mundialization program, proceed to undertake a twinning program with a municipality in another country, and to fly the United Nations flag with the Canadian flag from City Hall at all times.

On May 12, 1989, Mayor Bird signed a twinning agreement with Mayor Kurihara of Itabashi, Japan.

On May 6, 2005, Mayor MacIsaac signed a twinning agreement with Mayor de Graaf of Apeldoorn, Netherlands.

Burlington celebrates our twinning with Itabashi, Japan and Apeldoorn, Netherlands by hosting a variety of events to connect us to these cities.

Why Rainbows on the Peace Pole? 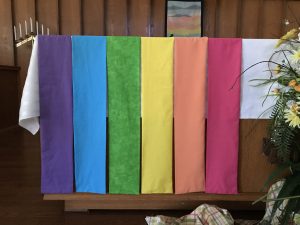 The rainbow is a symbol of affirmation.  The church has adopted the following Affirm Statement.

We affirm, include, and celebrate people of every age, race, belief, culture, ability, income level, family configuration, gender, gender identity, and sexual orientation in the life and ministry of Port Nelson. As followers of Jesus, we believe that we are part of the body of Christ. The apostle Paul said that ‘the body does not consist of one member but of many’ and all are indispensable. (1 Corinthians 12:14, 22-26)

Port Nelson United Church celebrated becoming an Affirming Ministry of the United Church of Canada on June 4, 2017. As the first Affirming congregation in Burlington, Port Nelson has made a public commitment to work for the full inclusion of people of all sexual orientations and gender identities, as well as affirming the variety of people who are part of God’s loving creation.

Plants Selected for the Community Garden

The main criteria for choosing the different plants in the community garden were to provide sequential food for pollinator species, for birds, butterflies, bees, flies, moths and that the plant was derived from a native species.  We know native species will be hardier and more adaptable to our location. Native plants will have more appeal to our native pollinators, the insects, bees, butterflies etc are familiar with these plants and can recognize them. Many plants have been hybridized and modified to put more emphasis on the blooms whereas we want our emphasis to be on food production (nectar rich plants). We also wanted to provide blooms and hence food for as long a period as possible so care was taken in choosing early, mid and late blooming species.

We are fortunate in the location of our pollinator garden as it is between two previously installed gardens on the Port Nelson United Church site. There is some duplication in the plantings which encourages pollinators to stop at each of the gardens.

There are many factors which have contributed to the decrease in pollinator species: use of chemical herbicides and pesticides, urbanization and lack of appropriate food, climate change such that bloom times are changing and do not meet the needs of the pollinators, and fractionalization (the great distances between appropriate food sources.) We hope to remedy what we can, that is we do not use pesticides, we have tried to use many native plants and we have three consecutive gardens which provides some continuity in food sources.

Some of the plants which are in the garden are listed here with a few details about each: 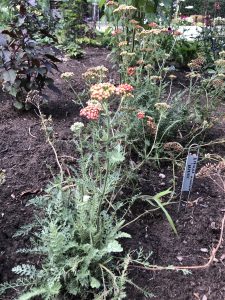 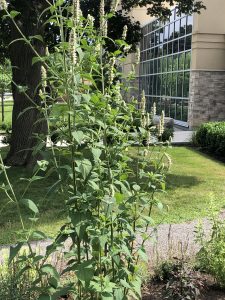 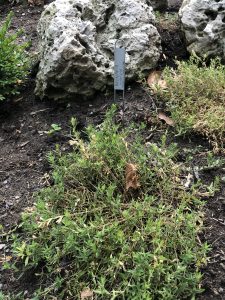 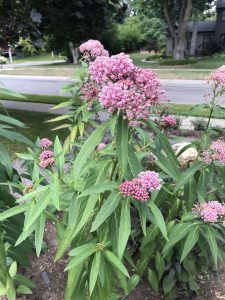 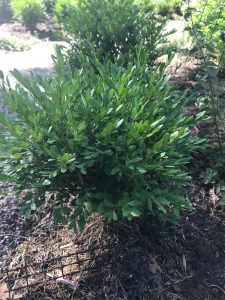 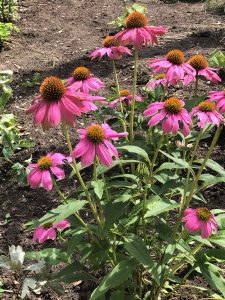 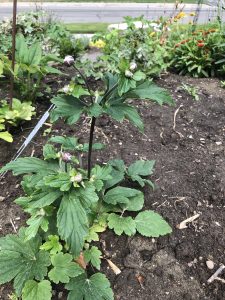 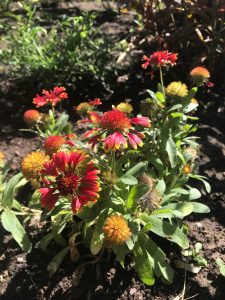 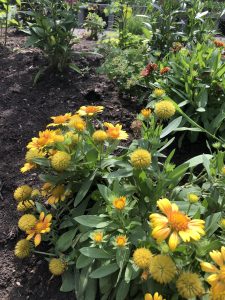 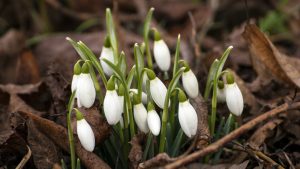 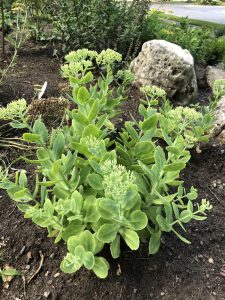 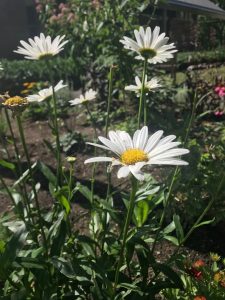 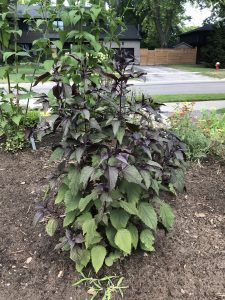 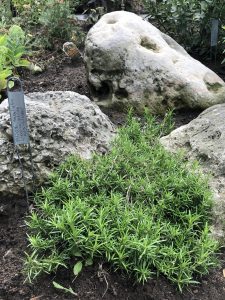 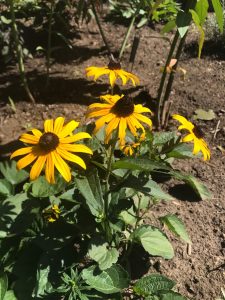 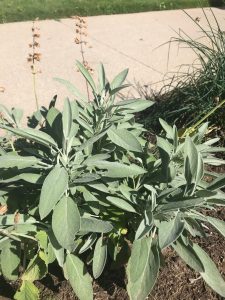 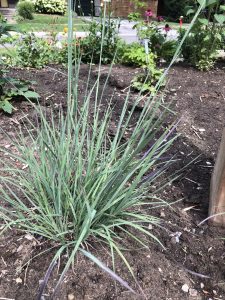 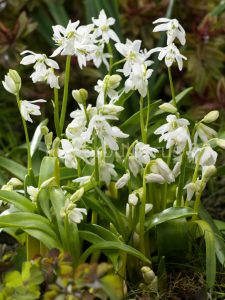 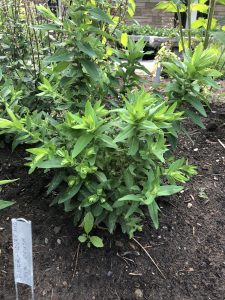 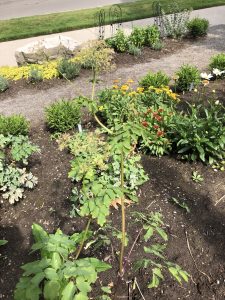 First name is the genus, second name the species, then cultivar and finally in brackets a common name for the plant